This is a approximately 500×500 Battles map surrounded by a void that can be used for a 1v1, or anything up too a 15v15. It uses a terrain that I created, and includes structures, rivers, bridges, and pathways. Its a simplistic map, and only use 3 Repeating Command blocks,  so there should be No / Very little lag making it great so large battles. Ive tested this out on my device and it has functioned well with 20+ people.

When you join you’ll spawn in a Room with the option too pick between two different teams. The Red team and the Blue team. They both spawn in a Fortress on opposing sides of the map. Arrows can be found in the Green building in the Fortress.

Map
==========
The map is 500×500 roughly. When in the game, you’ll respawn with a map of the world so you can see where you are. People on Your Team will appear white, and people on the Other Team will appear Random Colours.

There are rivers and lakes the go throughout the map, and an island on which one of the Outposts is located. This island is connected via 4 bridges. There are also 3 Windmills throughout the map which can be used as Vantage Points. There is also a tunnel on the western side of the map. There are Roads, Paths, and Traisl which can be seen on the map which connect everything together 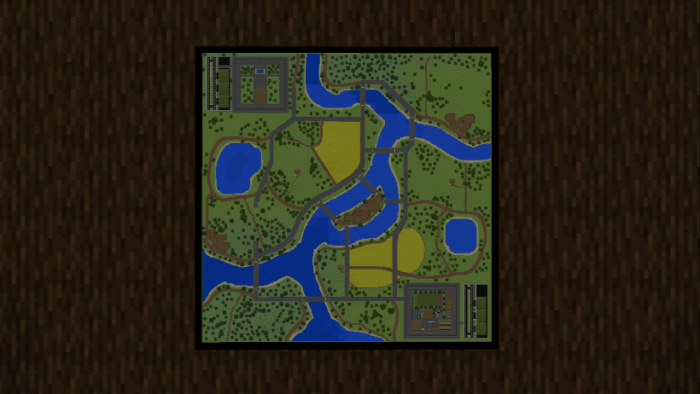 Outposts
==========
On the map their are 3 outposts: Southern Outpost, Island (Central) Outpost, and Northern Outpost. These can be seen on the map above. Each Outpost has a Flag, Ammunition Box, and Regeneration Box. Once in an Outpost, you can capture it for your team too change the flag colour.

Every 10 Minutes You’ll receive an XP Level and you’ll go up a Rank. If you wish to give someone a rank straight away, make sure your Operator, then type “/xp [RankNumber]L [Playername]. E.g, “/xp 20 Co2byJ98” would give me the Major General Rank. When pressing the respawn button you’ll respawn with the rank, which will have different gear (Better the higher rank you are), and a different uniform, with a chestplate of your team colour.

If you get stuck when respawning, it is a bug that can happen due too poor connection. The person will just need to be /kill-ed, and will need too respawn again.

Made by Co2byJ98, with help from TXO Saber & Sirgreater (Xbox Usernames)
If theres any issues please contact me.
We have a discord where we do weekly large battles: 9CSc4Vt