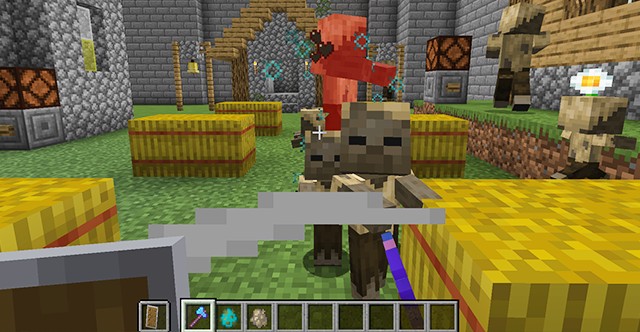 That’s right Minecraft combat is changing “Again” – Even to this day Minecraft 1.9 the combat update was the most controversial update ever added to the game. Good news, that’s all about to change and Jeb himself is taking control of this soon to be update.

So far we have had 4 combat test snapshots, each one previously hasn’t felt game changing. With the latest introduction to Combat Test Snapshot 4 things seem alot smoother, gameplay seems much better and here at McBedrock we feel this is a step in the right direction.

Everything you read below was posted by Jeb himself on reddit

Since doing something this the last minute on a Friday is a great idea: Combat Test Snapshot Number 4

Happy Thanksgiving! Time for the fourth test snapshot of new combat mechanics! This time the snapshot is based on version 1.15 of Minecraft, but is still not compatible with the 1.15 pre-releases!

I’m very grateful for all feedback and comments. This time I actually made a few dramatic changes that hopefully will allow for a snappier and more varied PvP experience.

Whenever I get the “just revert to 1.8”, my eyes roll a full 360 in their sockets… I have to design a system that works well both in PvE and PvP, and well on touch and controller as well as mouse-and-keyboard. It will never be 100% equal for everyone, but I will at least try something that works OK in most scenarios while still giving some design flexibility.

However, it’s great when people pinpoint exactly what it is they’re missing the most from 1.8 PvP gameplay. Could be w-tapping, item combos, fishing poles, or something else. If you are passionate about a specific detail you should definitely make yourself heard.

First of all, some basic combat changes:

In addition to replying here on reddit, you can head over to the feedback site to discuss specific topics here: https://aka.ms/JavaCombatSnap