This addon is intended for developers, map makers, players and those willing to use Minecraft as an educational tool. It adds Numbered Blocks and a new kind of command block packed with many enhancements to the game. This new command block is called CPU and is capable of running multiple commands per line, parsing and executing mathematical expressions, reading and placing sequences of Numbered Blocks in the world, among other things. This addon requires the experimental Scripting API (currently only available for Windows 10, and on Android using latest version of Blocklauncher).

These are orientation aware and will rotate themselves once placed in the world according to the player’s facing direction. They can be crafted by putting a Cobblestone block in a Stonecutter. They can also be obtained using this command:

Just replace the 0 with your desired number. If you need to rotate a number once placed just touch it (right click or short touch) with a Wooden Stick or with any Sword.

CPU blocks can only be obtained using this command:

CPUs have many more functions than the standard Command block. Once placed in the world the CPU will generate a name for itself. This name can be used later for relaying commands remotely to the CPU. When there is no other CPU in the world the 1st one will name itself “foo”. Every CPU after that will take an unique random name in the form “c-????”, where ???? will be replaced by hexadecimal characters (0-9, a-f). This initial name can be changed from the CPU interface.

CPUs can be activated and manipulated remotely or from their own User Interface (UI). You can enter the CPU UI the same way that you would use to rotate a number (touching it with a stick or a sword). To manipulate a CPU remotely you’ll have to use this command from either the Chat or another command block:

You’ll have to replace CPUNAME and COMMAND as necessary.

The most basic enhancement offered by the CPU is the ability to sequentially execute multiple commands written on the same line. This is accomplished by separating all commands using two or more consecutive semi-colons (;;, ;;;, etc…). For example:

When issuing commands to a CPU from the chat or another normal command block, if you want to include a double-quote (“) as part of your command and not as a delimiter you’ll have to escape it. In other words, you must precede it with a backslash like this \”. This is not necessary when entering commands on the CPU UI. 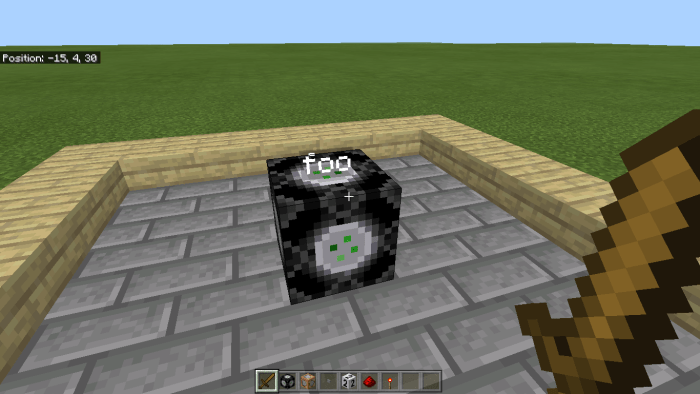 The CPU can store single commands and command sequences in multiple Command Slots. This system allows reusing them and the development of complex programs. Each Command Slot has its own name and can contain command sequences of up to 16384 characters. There is also a list of special commands that only the CPUs can understand.

To store commands in a slot from the chat or from other command blocks you should use this command:

To delete a slot use this command:

To delete all the currently stored slots use this command:

To list all currently stored Slots use this command:

To execute the command sequence stored in a Slot use this command:

The “/exec” and “/list” commands can execute or list any number of slots sequentially in this way: “/exec SLOTNAME0 SLOTNAME1 SLOTNAME2 …”. They also support the use of wildcards (“*” and “?”) like this:

One extra improvement over standard command blocks is that CPUs cannot be destroyed by hitting them. To destroy a CPU you’ll have to enter its UI an click the button labeled “Kill me”. To avoid accidental destruction, this button will have to be clicked 3 times. If you want to destroy a CPU remotely you can use this command:

The CPU includes a math parser provided by the mathjs javascript library ( https://mathjs.org ) which allows it to execute complex operations. To perform an operation you’ll have to precede it with 2 slashes (//), and assign its result to a variable. To perform multiple operations on the same // command you’ll have to separate them using a single semi-colon. After that, you can use any variable value within other commands by enclosing the variable name like this “@`VARNAME`”. Here is an example:

The previous command will print this line to the chat:

All variable values are persistent and will remain declared between world loads. For this purpose the CPU uses a special Command Slot called “__SCOPE__”. This Slot is not accessible from the UI, but can be read using the “/list” command.

It’s important to mention that this addon uses a patched version of the mathjs library. In this version variables don’t need to be initialized before use. Any undeclared variable will have a default value of 0. This allows expression like “//a= a + 1” to work without throwing an error. Keep in mind that this patch may cause some strange behaviors in the parser.

If you want to remotely clear all currently assigned variables you can use the command “/reset”:

This addon also expands the mathjs parser with custom functions that can be used in operations to enable interaction between the parser and the world. Let’s check them out.

getnum(POSITION)
This function will return the value of a continuous Numbered Blocks sequence located at POSITION. It uses the same POSITION values available for the pos() function. The POSITION location should be the least significant number of the sequence (To read 2019 its POSITION should be the location of the 9 block). The orientation of the sequence will be taken from the block at POSITION, it doesn’t matter if the orientation of the other blocks in the sequence is different. This function will consider a sequence finished after finding the first non Numbered Block.

setnum(POSITION, VALUE, STYLE)
This function will place VALUE as a sequence of Numbered Blocks at POSITION. There must already be a Numbered Block at POSITION, for the orientation of the sequence will be the same of that block. The STYLE parameter is an optional string that allows to control decimals precision, whether the VALUE decimals will be rounded or truncated, and whether the new Numbered Blocks sequence length will be restricted to the one already existing in the world or if it will be unbounded.

The syntax of STYLE is as follows:

getblock(POSITION)
This function gets the block id at POSITION inside an object, it also gets its block state properties if present.

moveme(‘POSITION’)
This function will teleport the CPU to POSITION.

The CPU allows to dynamically replace variables for their values in commands using this syntax “@`VARNAME`”. Note that the enclosing character is a backtick (“`”), this character can be found in OSK as the alternate character for the tilde (“~”). If VARNAME is an array with 3 values it will be recognized as a position and replaced with its 3 values separated by spaces. If VARNAME is an object, it will be replaced with its stringifyed version. The variable substitution will execute in all commands except “/store”.

CPUs are sensible to redstone signals in their immediate surroundings.

When a CPU receives a redstone signal it will execute the commands stored in the “_def” slot. This default slot cannot be completely deleted. If you try to remove it, its contents will be erased but the slot will remain.

The redstone signal strength will be stored in a variable named “RS” and can be used in operations.

There are some peculiarities for the way a CPU reacts to redstone. Right now CPU Blocks can only react to signals in direct contact with them (x+-1,y+-1,z+-1), thCPU Demo Worldey are sensible to all normal signal sources at those positions except for powered blocks (ie: a dirt block powered by a button), and Jukeboxes playing a disc.

CPUs can only read real signal strength in Redstone Wire, Pressure Plates and Daylight Detectors, all other sources will be read as a full signal (15), even for directly attached Comparators. The only way to read the real Comparator output signal is to place a redstone wire between the Comparator and the CPU.

The CPU UI is pretty much self-explanatory. This version features an On Screen Keyboard (OSK) and a basic physical keyboard support. Due to limitations in the addons experimental UI system the keyboard layout is restricted to the standard US/English one. Both the OSK and the physical keyboard share the same layout.

All keys have a basic auto-repeat function active. The OSK also features some helper keys displayed on both sides of the keyboard for easier and faster command input. 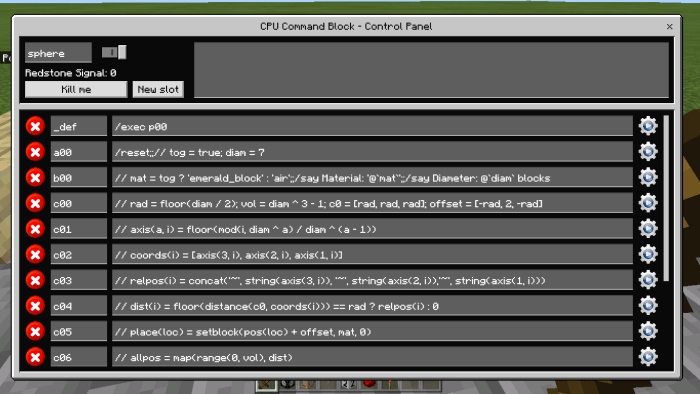 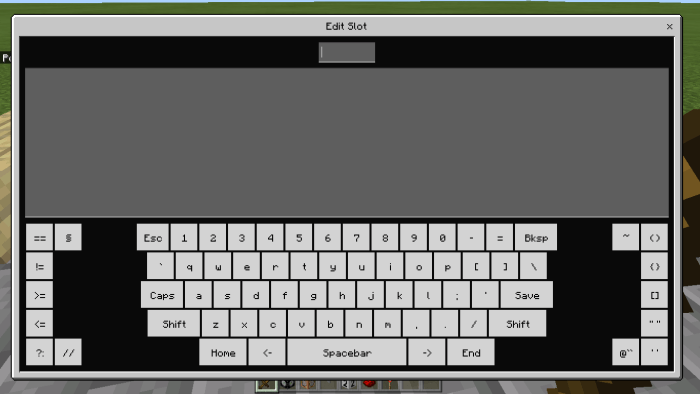 This addon provides some CPU demo programs as examples. To test these CPU programs you’ll have to enter one of these commands to the chat:

These commands will setup a CPU with same name as the function (A CPU named “sphere” for the sphere function…) with the necessary commands while deleting all previous Command Slots stored in that CPU. You can also test these programs in the attached Demo World.

Please keep in mind that this is an early beta and a proof of concept. It’s my intention to keep improving this addon in the future. Here is a list of currently planned features and improvements:

If you have a bug report, want to make a suggestion, have a feature request, or just want to provide feedback, please contact me at my twitter: @kodexky

Also, if you want to keep informed about changes and new releases of this addon please follow me there.