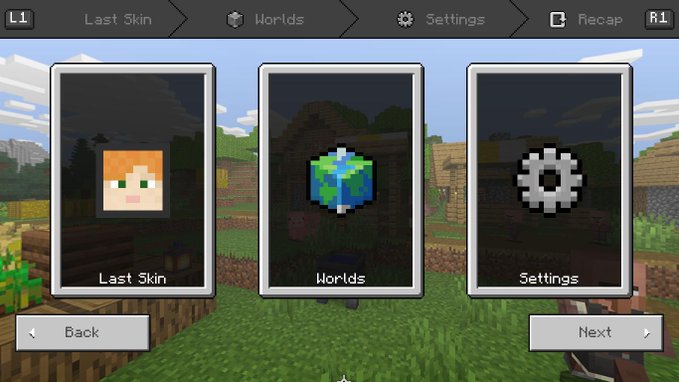 There has been alot of speculation over the past few weeks about Minecraft Bedrock (iOS, Android, Windows 10, Xbox & Switch) version making it’s way to the PS4 community. Now although non of the information we share today is confirmed, it’s a great indication that sooner all later PS4 players will join the better together community.

This information has all came about during the 1.13 beta for Android, Win 10 & Xbox. Credit has to be given to: https://twitter.com/wildthegamer_ who is digging into the files to find this information but has he quoted many times Microsoft are simply not hiding these files from the public eye

This all started with the basic menu screen (seen below) which shows the PS4 layout but does not feature achievements. This is because one of the reasons Sony did not want crossplay is because they did not one a direct competitors accomplishments popping up on their platform. This information was all found in the 1.13.0.1 beta so let’s move onto the 1.13.0.2 beta info because things get even more interesting.

With the release of the 1.13.0.2 beta comes more pictures again not hidden but visible for the public. These pictures (see below) show what the NEW bedrock engine UI is going to look like now we know this is true as earlier this year the devs confirmed they are overhauling the UI for bedrock to become user friendly.

This is believed to be a PR stunt by Microsoft to let players find these files, to let creators make videos, website posts & get the hype for this version up in the community. The last thing we want to focus on is the top image you see in this article also shows Realms for PS4 bedrock will be purchasable with Minecraft coins (Minecoins) and PS4 bedrock will feature both controller and keyboard and mouse support.